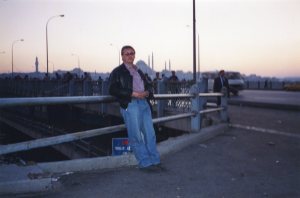 When Arif Sağ re-emerged as a recording artist in the early 1980s having given away his arabesk career in the mid-1970s and worked as a teacher at the İstanbul Devlet Türk Müziği Konservatuarı, he released a cassette album called Gurbeti ben mi yarattım. The title song was from the Kangal aşık Muhlis Akarsu. Sağ’s recording is intimate and almost reticent – very striking in a restrained way. Oddly the cover of the cassette that I obtained in Urfa in 1987 (which I believe is the original 1981 release) has a photograph of Sağ (see photo below) that harks back to his arabesk days, dressed in yellow zip up blazer, slicked down hair and pencil moustache – totally belying the intimate sound of voice and bağlama on the recording. This would be the recording that began Sağ’s stylistic hegemony over the performance of Alevi music in the 1980s and 1990s. The iconography was yet to catch up.

Sağ recorded the deyiş again for the second of the Muhabbet series of recordings two or three years later. Muhabbet 2 is arguably the finest of the series in terms of its thematic strength which centres around the concept of gurbet – absence from one’s native place or home. Gurbeti ben mi yarattım is the final song on that recording although only three of the four verses are sung (the second is ommited) with Sağ, Musa Eroğlu and Muhlis Akarsu taking turns on the verses – a quite unusual approach for the Muhabbet series. Akarsu of course recorded the song but sadly, although a number of his recordings have been issued on CD, that one has not. However a recording of Akarsu performing it live is available on YouTube.

Gurbet is obviously the theme of the deyiş and this is deepened to almost ‘starkly bleak’ – thanks Tom Rapp! – realms with the addition of the theme of yokluk – which refers to absence, even to the degree of non-existance (it also has a meaning of poverty). I don’t think I’ve captured the full sense of yokluk so that will require working on. Another word to mention is sıla in the mahlas line which I have rendered as ‘returning’ but it really means return to family, friends and one’s native place – the opposite really of gurbet. A good translation here for imkân also rather eludes me. Having tried ‘possibilities’ it sounded too lumpen and ‘practicalities’ would be even worse. For the moment ‘chances’ it is. The deyiş is in the short koşma form (semai) with only 8 syllables per line which gives it a simple directness; but it is constructed with typical economy and finesse.

Destitution has compelled me

It came and took my youth

I received neither letter nor news

Parted from my country and home

I felt the loss of all that was mine

Evening comes and the shadow settles

Winds blow against my hope

Don’t believe this isolation has passed

How I fell upon helplessness