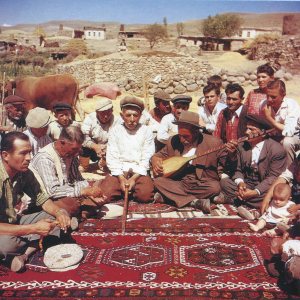 Aşık Veysel Şatıroğlu (1894-1973) was born in Sivrialan near Şarkışla in the Sivas region, was and is the most renowned and generally loved of all 20th century Turkish aşık-s. His identity is strongly associated with Republican Turkey and indeed there is a statue of him in pride of place near the entrance of Gülhane park in Istanbul. His songs have a strong philosophical and humanistic character and he tended to avoid a strong (and hence political) expression of his Alevi identity, although of course it is evident in his songs. The finest recordings available are the field recordings made by Alain Gheerbrant in 1957 in which Veysel played more naturally to his Alevi identity. Gheerbrant, out of consideration for Veysel did not publish the recordings until after the aşık’s death. They are available on the Radio France  Ocora double ablbum published in 1985 (558634/35) from which the photograph here is taken.

Muhlis Akarsu recorded Beni hor görme on his recording titled “… gönül” although, interestingly, with Veysel’s mahlas replaced by the word “insan” (human) and the order of verses changed with the mahlas verse sung as the second of three verses. Arif Sağ also recorded a similar version on his 1981 recording Gürbeti ben mi yarattım with the mahlas verse back in place but, like Akarsu, with “insan” replacing Veysel’s mahlas. Sağ over a decade later produced what remains Nuray Hafiftaş’s finest recording, Şimdi oldu, which also includes the song, but with the Veysel’s mahlas restored.

Translation challenges include getting a workable reading of the form of the refrain line with it’s half question and answer. It implies a conditional sentence although it does not use that construction. One writer, the wonderfully named Azeri scholar Sednik Paşeyevi Pirsultanlı, does in fact read the line in this way, e.g. “sen yolcuysan ben baç mıyım?”. I have tried a slightly different more direct approach. The second line in the penultimate verse also provides a challenge to convey in a line a satisfactory sense of the original. It refers to the concept of the true spirit or soul of person not being able to ascend to a higher level until the carnal and worldly desires and self (nefs) are done away with.

Don’t look down on me, my brother

You are gold – so am I then bronze?

We are of the same existence

You are silver – so am I then thin metal?

Whatever exists is in you and in me

The same existence in every body

That tomorrow is headed for the grave

You are full – so am I then empty?

Some are mullahs, some dervish

God, it seems, gave to us whatever

Some might talk of the bee and the flower

You are honey – so am I than a heap of grain?

All of our bodies come from the earth

Kill off the carnal self before the dying

So the creator seems to have commanded

Veysel is disposed to be a lover

We are brothers made out of the earth

We are the same as fellow travellers

You are the traveller – so am I then the toll?